Can you form a four letter word?


It has been 225 years since the Philadelphia Convention concluded their proceedings and submitted to the states a new Constitution, with the goal "to form a more perfect Union" than what the Articles of Confederation provided for. It was not a perfect solution - some delegates predicted that it would not last more than 150 years. Others were worried that there were no guarantees of the rights of the states or the people. Many problems were kicked down the road for future generations to deal with and resolve.

But all that was for the future... as the delegates signed their name to the new Constitution and then

That the preceeding Constitution be laid before the United States in Congress assembled, and that it is the Opinion of this Convetion, that it should afterwards be submitted to a Convention of Delegates [...] for their Assent and Ratification. [...] and, that after he shall be chosen, the Congress, together with the President, should, without Delay, proceed to execute this Constitution.

By the unanimous Order of the Convention

And then... they adjourned.

It would be 10 months before nine states would ratify the Constitution, meaning it would be put into force, over a year before the Continental Congress would cease to function as a governing body, and a year and a half would pass before a new Congress under the authority of the Constitution would hold its first session. It would be over four years until the Bill of Rights came along. Exactly 75 years after the Constitution was signed, the Battle of Antietam would give Lincoln the ammunition he needed to issue the Emancipation Proclamation that would eventually become the Thirteenth Amendment. There would be subsequent changes to the Constitution that continue to bring it into the modern age and closer, we hope, to the perfection the original authors strove for. 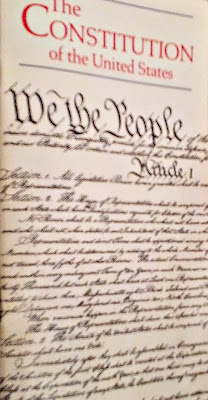 The pamphlet I have with the Constitution and Amendements in it has the following text inside the front cover: "The Declaration of Independence was the promise; the Constitution was the fulfillment."

I don't think thats entirely true. The fulfillment is written in the preamble itself: We the People of the United States.
Post from Priz When: 8:43 PM