EAST SIDE. WEST SIDE.

From the East Side to the West Side, Manhattan is full of visionary four letter words.

One hundred years ago today, Grand Central Terminal in New York City opened to the public for the first time. At the time it opened, it represented the visions and dreams of its creators. At its simplest, it was a way for the owners to take advantage of new technology, electric rail, to bury their tracks and allow buildings to be created over the site of their old rail yard. But this simple premise prompted the building of a beautiful new station, stores and offices to surround it, and brought people to work and shop at those buildings. A rail station which, previously, was mostly used to transport goods into and out of the city became a major hub for people from Connecticut and Long Island to visit the city for work or leisure. 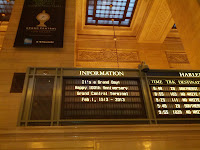 Quite literally, it helped create the Manhattan that we think of today. Without Grand Central, there would have been no development along Park Avenue, and many of the iconic buildings that now exist there... wouldn't exist at all. Midtown and the east side of Manhattan would not have developed as a center for commerce, retail, and entertainment.

It is almost shocking to think that forty years ago, it almost got torn down. People who lacked vision had seen Grand Central slowly decay. Lacking the money and the will to restore it, they wanted to tear it down, keep the station buried underground, and build a modern office building above it. Having seen a similar fate befall Penn Station, on the west side of town, New Yorkers fought to prevent the same from happening to Grand Central. In the aftermath of a long legal battle that saved the building, the people of the city came together to achieve a new vision for the station.

The main hall of Grand Central serves an interesting dual role. For most people, they must cross through the great hall when transferring from their commuter rail car on their way to the subway station, on the way to their final destination. But many people linger instead. Grand Central is part of their destination, and they pause to take in the grandeur of the ceiling mural or the splendor of the great clock and other adornments. Commuter and tourist alike take in the many shops, food stands, and stores that surround the central hall - from the bakery where you can get a New York black-and-white cookie, to the pizzeria where you can get a No. 6, to the Apple store in one of the most prominent locations in the city. 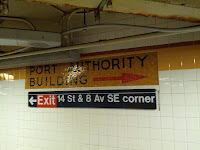 I crossed the main hall on Friday and Saturday with all this in mind. And although I was carrying my Apple laptop, and I partook of both a black-and-white and a No. 6... my destination was not on the east side of town... but on the west. Inside a building that used to house the Port Authority, but now was owned by Google, I was going to learn more about another product that, in more than one way, demonstrated the vision of the future. Google had invited a very small group of people to try out Google Glass, and I was fortunate enough to be one of those invited. 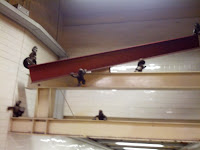 I can't really say much about the event itself, but after two days there, I was even more excited to be part of this new project, and looking forward to the future. I pondered the connection between Glass and Grand Central. Both are products of their time - inspired by technology that had come before, but achieving reality at a particular moment in time. Both destined to make changes far beyond what most people would expect. Both championed by people who had a vision and the means to put that vision into motion.

There are differences, to be sure. The version of Glass that I saw today will be very different than its counterpart 100 years hence, while Grand Central is fundamentally the same as it has been for the past century. But as Grand Central has adapted over time to meet the needs of a changing city, so will Glass. And as much as Grand Central was the seed of that change... so does Glass have that same potential.

How will we know? The answer lies in three four letter words: Time will tell.

Email ThisBlogThis!Share to TwitterShare to FacebookShare to Pinterest
What: goog, past, tech