The subject is, for me, rather embarrassing for a lot of reasons - some of which I won't go into right now. When the topic comes up, I usually ignore it. Or let it roll past me. Or laugh it off.

But it has come up a few times this week.. and today I just can't ignore it. 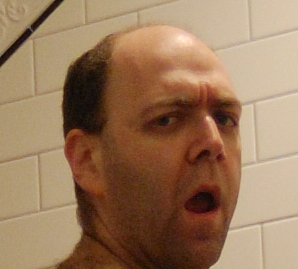 It is no secret that I'm going bald. It certainly isn't any secret to me - I've known it for over a decade now.  Having my father and both my grandfathers bald gave me some pretty solid odds that I would go bald eventually. For a while I wore my hair a bit longer - at least longer for me. But my hair gets a little wavy when it gets even a little long, and I find it uncomfortable, so I usually wear it as short as possible. This is pretty comfortable for me - I had to keep it short for years while I was in the military, and I like how it looks and feels on me. So as this very short hair started to vanish, I paid it little mind.

This came to a head (pun not entirely intentional) this week when someone saw a picture of me as I was adjusting a videocamera and commented on how the light reflected off my head. Later that week someone  criticized some executives by calling them "balding white men". 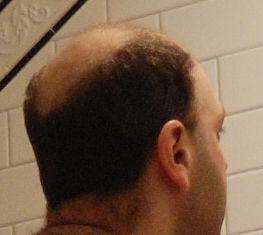 I thought people would treat me as I've always treated them - that it wasn't how they looked, but how they acted that was important. I'm not sure why I was so surprised when I realized this wasn't true... even from people who loudly criticized others when they were judged based on superficial outward appearances. I'm not typically insecure about how I look.. but these and other similar comments hurt me more than I expected.

It is hard to say that "I don't care" about going bald. For the most part, I never think about it. Yes, it means I have to wear a hat in the winter so I don't lose all my heat, and in the summer so I don't burn. It means I have trouble getting a camera angle that doesn't glint. But I also get to joke about how it isn't a bald spot, its a solar panel for a sex machine. I can reminisce about the old Usenet news group called "alt.sexy.bald.captains.picard.picard.picard". There are plenty of men I know and admire who have similar hair patterns to mine - I like to think we have more stuff inside the skull since we don't have much outside the skull. And even if I did care... there is nothing I can really do about it.

Why do we have such a silly fixation on hair?

Why do we have such silly fixations on such trivial things about people in general?

Some more thoughts another time.