An ICON is a monumental four letter word.

Some thoughts on statues and taking them down. 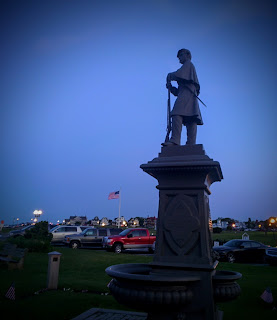 This statue stands in a prominent location in Oak Bluffs, Massachusetts. It was erected in 1891 by a former Confederate soldier as part of an attempt to reconcile himself with the local former Union soldiers. Every time I see this monument, I think of the fury surrounding monuments and their role in history. More on this particular monument shortly, but I want to think of a few others first.

We hear it again in Charlottesville, VA over statues that were erected around 1920. And while both Generals Lee and Jackson were Virginians, so their statues make at least a little sense here, we must ask, again, what history is being erased by their removal? Where is the statue of George Washington, prominent Virginian, in Charlottesville? Where is the statue of General George Custer?

Where would a statue of Lee make sense? Where is there a statue of Lee in historical context? Well, there happens to be one in Gettysburg, PA, along with scores other monuments to the soldiers who battled there. That is history. And the monuments there are a testament to that history, as is appropriate.

But it turns out we do have an example of our history being "erased" through its battlefield monuments. There is a small statue at the site of the Battle of Saratoga during our War of Independence, erected in 1887, to the unnamed General who helped turn the course of the battle there. It consists of only a boot. Nearby, an obelisk contains spots for the four Generals who were on the field of battle, yet only three bear statues. At West Point, all the Revolutionary War Generals are listed, yet one name is deliberately left off. But would people say that it is inappropriate to omit the name of Benedict Arnold from our monumental history?

Which brings me back to our Union soldier in Oak Bluffs. When Charles Strahan, the former Confederate soldier, dedicated it, he declared his loyalty to the Union, gave thanks for the abolishment of slavery, and called for "more kindness". It took a while for that reconciliation to come about, but I like to think that it was because of his focus on the foot soldier, not the politicians and generals, that it was achieved.

These are the differences between the statues in New Orleans and Charlottesville vs the ones in Gettysburg, Saratoga, and Oak Bluffs. The former are trying to write a history that didn't exist in the first place, while the latter are helping to preserve the legacies and lessons of our history.

People can learn the lessons of history. People can be kind to others.People can take action to bring that kindness and reconciliation about. There is no magic wand and it takes time, but it won't happen while we have daily reminders, both in forms of statues and in the actions we take, of our bitter history. We should learn from these lessons and actively move forward.

Email ThisBlogThis!Share to TwitterShare to FacebookShare to Pinterest
What: news, past