Fair is the four letter world... I mean word... of tomorrow. 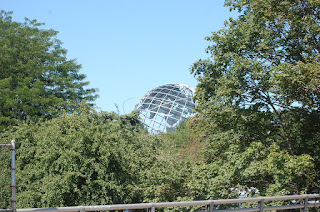 Growing up, one of the things I would take off my parent's bookshelves and read would be my mom's copy of Official Guide New York World's Fair 1964/1965.  I don't know why it always fascinated me, but there was this undercurrent of optimism and technology that you could feel through the book.  The Unisphere was at one end of its axis, at the Fountain of Continents, and represented "Peace through Understanding".  At the other end of the axis was the Court of the Universe and the Fountain of Planets, with the Court of the Astronauts in between.  The space age was in full swing.  It seemed exciting to me.

The fairgrounds were turned into Flushing Meadows Corona Park after the fair closed.  Most of the buildings were taken down, and a few of the attractions moved.  I had always wanted to visit, but somehow never made the time to go.  I still have the fair book, and I even have a NY State license plate from 1964 which mentions the fair.  But I had never taken the pilgrimage that I had wanted.  Until last weekend, when I met up with a few friends and spent a wonderful few hours getting just a glimpse of what I had read about so many years before. 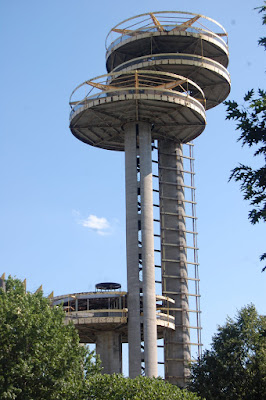 Not everything was as I expected it to be.  I had never realized the Unisphere showed topology.  I knew the NY Pavilion had been closed for years, but I wasn't really prepared for how bad shape it would be in.  I was, however, thrilled to see the park so well used - from the volleyball courts to the food vendors (and some wonderful smelling foods) to the zoo that I didn't know existed, it was exciting to realize that the park was still alive, and captured a new spirit an excitement of a city that was alive.

And I realized that our concept of the future had changed.  The Fair in 1964 represented technology and industry.  There were things demonstrated at the fair that are, today, so common place we don't think about them - things like the "touch tone" telephone.  Other things from the fair that were revolutionary are now obsolete - like the color television tubes that were prominent all over the fairgrounds.

Even the Unisphere is obsolete now - in 1964 no human had traveled further than the earth's orbit.  The "view from 6000 miles" that was represented by the border of the fountain was never before seen.  But in 1968, Apollo 8 brought us pictures of the earth in full color from much further away, and today pictures of the earth from space are normal. 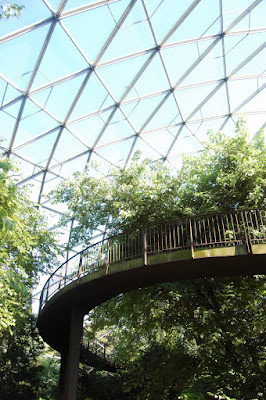 But the central theme, "Peace through Understanding" remains important.  The fair brought us the Walt Disney attraction "It's a Small World" at the UNICEF pavilion, and the world is smaller today than ever before - thanks to some of the technologies that the 1964 fair showcased.  We can see images from around the world, and share ideas and experiences.  We no longer need the Worlds Fairs as much as we once did - companies bring their technology to all corners of the globe.

This picture is one of my favorites from the day.  It is taken from inside the Aviary at the Queens Zoo (once the location of the Chrysler pavilion).  The Aviary has a note saying it was the Winston Churchill pavilion, but I have found little info about that pavilion.  I think it is the "World's Fair Pavilion", a geodesic dome that was used for various displays and dismantled at the end of the fair.  In its new incarnation, it has a path spiraling through the trees it contains, letting visitors view the birds at a variety of levels.

The picture here is a new vision of tomorrow.  Not the stark future of the 1960's, now rusting, but rather an endlessly turning path, where technology and nature blend together.
Post from Priz When: 9:20 AM