It was fifty years ago since one man took a small STEP, and humanity took a giant LEAP, as we first set foot on the MOON.

Last week, someone asked me why I liked space. The question was unrelated to the current news about the 50th anniversary of the first lunar landing, but my answer was very solidly based on the Apollo missions.

As I listen to the audio from the mission and the profiles of everyone who worked on it, I'm moved by how the US pulled together. Watch news reports from 50 years ago today, and the news headlines from the next day, and it is touching how the world focused on this one event. Look at the mission patch, and you will see no names other than "Apollo 11", noting this was not the accomplishment of just three people.

And while the mission was initiated for propaganda purposes, and was filled with nationalistic jingo, right down to the names Columbia and Eagle, we always remember Armstrong's words as he stepped onto the surface. They foresaw a great future, with this just being the first step, and leap, into that future. It echoed hope and togetherness, even as we were diverse and conflicted.

Most importantly in my mind, as our lasting legacy on the moon we have left these words affixed to the lander's leg: 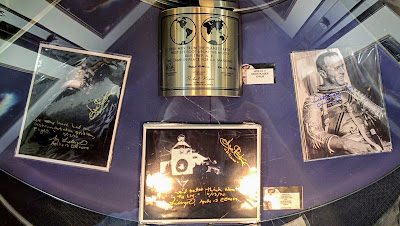 Email ThisBlogThis!Share to TwitterShare to FacebookShare to Pinterest
What: news, past