Hike is a four letter word that has its ups and down.

Last weekend I went for a hike.  No particular reason.  I've driven by this trail several times and thought it might be a nice walk.  I'm always on the lookout for good pictures, and it seemed like there would be a lot of potential for good photographs.  From the trail description, it seemed like it it would be a fairly short hike, only about a mile, although since it was up the side of a moutain, there might be a bit of a challenge.  I wasn't worried - I had hiked quite a bit when I was younger, and I thought I was in reasonably good shape.  Never mind that it had been several decades since I had last hoofed a serious trail, I did not have the hiking gear I once had, nor had I done a lot of long distance walks (never mind up the side of a mountain).  Still, I had been looking forward to this for a few days now, and I thought it would be fun. 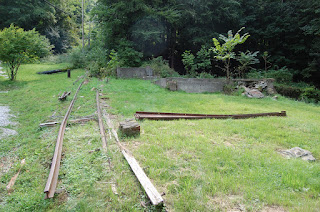 Setting off, the first part of the trail was fairly easy.  It was the remains of an old road that was flat and level, and not too difficult to walk on.  Getting to the first landmark point on the trail was the base of an old rail that used to take visitors up the mountain.  I say remains, because very little still existed there besides the founation and a few bits of twisted metal.

Next to it, however, was the first part of the climb.  Made easier since it was up a flight of stairs.  "If they're providing stairs for hikers, " I thought, "how bad could it be?" 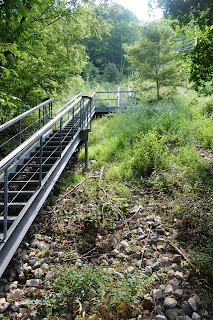 151 steps later, I was still optimistic.  The climb wasn't too bad.  Yeah, maybe I was breathing a little heavier than I should have, but overall I still felt good.  What was a little more disapointing to me was that  I didn't feel like there was anything I had seen so far that was worthy of taking a picture.  I was really hoping for some very nice nature shots during this walk, and nothing had really jumped out at me that was exciting.  There were a few flowers that were beside the stairs, but nothing dramatic that made me go wow.  No wildlife.  No birds.  Nothing that made me want to whip out my camera and start shooting pictures.

At the top of the stairs, I could look back and see where I had come from.  A little bit of the valley below me was visible, but nothing exciting.  I knew there would be better views from higher up.  I turned to face the rest of the path, and knew the real climb was just beginning.

It wasn't too much further up the hill, however, that I began to have doubts.  My breathing was rapid and my heart rate was higher than I would have liked.  I was sweating pretty hard.  I finally made it to the top of one small hill I saw a couple ahead of me.  They had just taken a drink and were getting up from some rocks and moving further up the hill.  I decided that might be a good place for me to stop and take a water break as well.  As I sat and sipped my water, I began to think about what I was going to write for this blog.  And I realized I had a choice.  I thought about whether I would write about how I would press onward, never giving up and never quitting, or how I turned back because I didn't think I could make it.  I sat for a while contemplating that, sipping water.  And eventually concluded that I felt a little better and perhaps I would continue on a little more and see how it went.  So I did.

As I continued on, I ran into many other people on the hike. Some going up, some coming down.  I ran into a couple who seemed to have no trouble walking up, although the man did comment how it was going to hurt his legs later.  I met a number of women, casually hiking up, chatting among themselves.  I met families, some with young kids, who were making this hike.  And here I was, sweating profusely, wondering what was wrong with me.  If they could do it - why was I having so much trouble.  Time and again I would stop and sip some water and think about this blog.  At any point I could turn back.  Or could I?  Somehow it seemed like I had already come so far that I really should just keep going further.  I didn't know how much further I had to go, but it seemed like it would be a waste if I had turned back now.  So on I went. 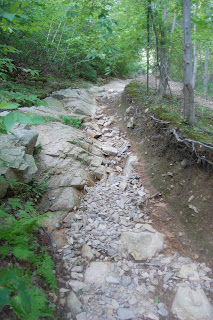 At one point, I saw a young man walking down the path.  He had in his hands two weights.  He had on his back a heavy pack filled with water bottles.  He greeted me cheerfully as he passed, and I greeted him as cheerfully as I could in return.  After he passed, I had to wonder, "could I have done this better when I was younger?  Could I have carried those extra weights as well?"  I didn't have an answer.  In a way, it was a moot point.  But, again, I had to think, "If he could do this, what is wrong with me that I was having such trouble?"  I thought, again, about turning back.  And, again, I thought, "I've come so far, I have to keep going."

And just the way I thought about that shaped the answer.  It no longer was a choice about continuing onward or turning back - I have to keep going.  I doing have a choice.  I paused at that and thought.  Of course I had  a choice.  All my life I have told myself that I have to do "something", that I have to keep going forward, that I can't turn back.  Sometimes that has helped me get through things.  Sometimes it is the right thing to say to myself to keep myself motivated and going.  Other times it is not - and I have made many poor decisions simply by convincing myself that I had no choice but to press onward and push through it.  When someone was teaching me poker, one of the things they pointed out was that at any time I could fold - if I have a bad hand, sometimes it is better to fold than to waste more money in pursuit of a victory I could not obtain, but people often convince themselves that they can't give up.

For whatever reason, I did keep climbing.  Along the way, I saw a lot of trash by the side of the trail.  Some of it, I stopped and picked up and put in my bag to throw out when I returned.  Some of it I couldn't get to, it was too far off the trail than I felt comfortable walking.  Some of it was too dangerous for me to pick up and carry.  But I did what I could, and I continued climbing.

Eventually, I broke out of the trees that had been covering me and scrambled over a rock.  I wasn't at the top of the mountain yet, but I got another good look at the valley below.  It looked much like the earlier view had, but I was higher.  Ok.  I'm not sure what I expected, to be honest.  I took a few pictures and kept climbing.  There were fewer trees here, so I knew I was getting closer to the top.  And sure enough, a few minutes later, I finally saw my first glimpse of the ruins I had been told were at the top of the mountain.

I wandered around the ruins for a bit, taking pictures of the scenery.  There used to be a hotel and dance hall up here once, with beautiful panoramic views.  I stopped to look over and take in the view.  I took some pictures.  I wandered a round some more.  And I paused. 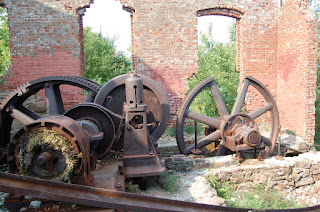 This was it?  This was why I spent the past hour climbing this mountain?  I had to think about that for a while.  Certainly, what I was seeing up here was nice.  The ruins were interesting.  I explored for about half an hour.  There wasn't too much to see.  Finally, I realized that I, once again, had a choice.  The trail continued further up the mountain to some other historic landmarks and things to see.  Or I could turn around and head down the trail again.

There was no longer a feeling that I had to go on.  I had made it to an important milestone.  I had explored what I had found.  And while it was nice, it was not what I was hoping for.  I had seen no animals along the hike.  I had seen no birds.  The view below me, although nice, was not wonderful.  The ruins, although interesting, were not captivating.  There were certainly things here to capture with my camera.  But I wouldn't know how well until later.  So I turned and began my descent.

On my way down, I ran into a family.  "How much further is it?" they asked.
"Oh, you're about half way there.  You're past the worst of it now."
They didn't look too thrilled that they were only half way up the mountain.  As we went in our separate directions, I heard them talking to each other.  "I hope it will be worth it."
I pondered that as I continued down the hill.  Was it worth it to me?  In some ways yes, and in some ways no.  It had certainly gotten me out of the house, and got me doing something I once enjoyed.  I used to love hiking and long walks in nature.  I learned a little bit about myself on this walk.  Hopefully I've learned a little about taking better photographs.  I learned that I need to get in better shape.  Hopefully, I have done some things to help others - I cleaned some of the trash along the way.

As I reached the base of the stairs on my way back down, I pondered my descent.  It took just as long to go down as it did to go up.  In some ways it was easier going down, but in others more difficult.  My legs hurt.  As steep as the hill was going up, it was still steep going down and I had to control myself.  When I finally reached bottom, I was limping slightly.

I ran into a man and two young sons.  About 5 or 6.  They looked excited to be going up the trail.  One of them said hi to me and asked, "Did you go up the mountain?"
"Yes," I answered, "Are you going up?"
"Yeaaahhh..." he replied excitedly.
I had some doubts if he could make it.  I thought back to when I began and some of the doubts that I experienced along the climb.  "Have fun, " I told him.