Down by the river, fishing off the pier for some more four letter words.

Inspiration for these blog posts comes in all forms. 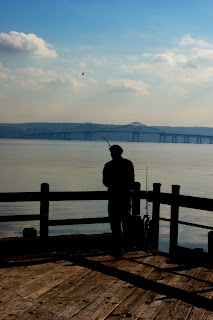 Today, it came from a photograph I took.

I was there just as the man silhouetted in the picture caught a fish (you can just see the pole bending in this shot).  I documented the rest of the capture and the man showing off his fish.  It was his first catch ever.  He had been fishing off this pier for three months, and had never caught anything before.

It wasn't too long ago that catching anything at all here would have been even more rare.  And if you did catch anything, the best advice would have been to throw it back.  The river was horribly polluted, reducing the fish population and leaving those that remained with high levels of mercury and other pollutants.  But time and hard work by environmentalists and fishers have improved conditions significantly.

Hard work does pay off.  For those who care about the environment... or just this one man.
Post from Priz When: 9:34 PM