Tilt is a four letter word that moves you ahead. 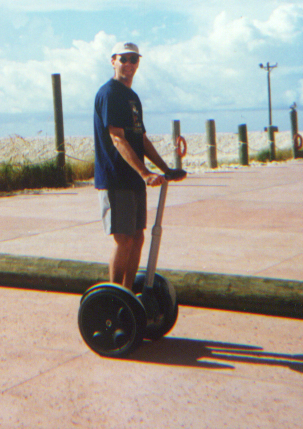 Ten years ago today, the Segway Human Transporter rolled into the public view.  A completely new take on a personal motorized vehicle, the Segway used innovative methods to control how one directed the unit to move and stop, focusing on leaning forwards and backwards as if you were trying to tilt it.  The built in gyroscopes, however, kept the unit balanced.

At the time it was released, it was proclaimed as a revolution in transportation.  Fleets of Segways were expected to take over city sidewalks, as throngs of people would get out of their cars and use the device to get themselves around town.  The postal service and many police services were expected to switch to it.  Steve Jobs hailed it as one of the greatest inventions of our time.

And yet... you don't see much of them these days.  Oh, for sure, they still exist and are sold.  You can find them in niche markets and uses.  But they never took over the sidewalks as people expected.  They were always seen as trendy and cool... but never quite practical enough.  Certainly not practical enough for the price.

So much brilliance encased in the system.  So much potential to do amazing and revolutionary things.  So little of it realized.