Time can be a mean four letter word.

On the other side of the world from the International Date Line is the Prime Meridian, the line marking Greenwich Mean Time.

Greenwich Mean Time (GMT) was established by the International Meridian Conference of 1884 as part of an effort to internationally standardize time systems and provide a common reference point for longitudinal determination.  That reference point was the Greenwich Naval Observatory in Greenwich, England - it still maintains a meridian line through its grounds.  The resolutions and suggestions and suggestions from the conference lead the way to a standardized definition of a day starting at midnight (previously, some "days" would start at noon) and eventually to time zones and offsets being defined in terms of their relation to GMT.

GMT stood until 1972 when it was replaced with the related system known as Universal Time, Coordinated (UTC).  Primarily based on atomic clock pulses instead of solar observations, with "leap second" adjustments scheduled as needed to keep it aligned with the Earth's rotation, UTC is the most commonly used standardized time system, although there are others that remain out there for specialized purposes.  And there are proposals to tweak UTC even further to make it simpler and easier to follow as part of the standard. 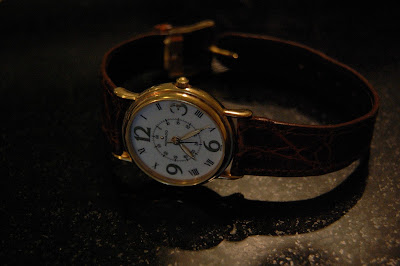 Email ThisBlogThis!Share to TwitterShare to FacebookShare to Pinterest
What: hols