Roll the pair of dice wrong, and you can certainly be experiencing some four letter words.

Yesterday I taught the four-year-old how to play craps. I didn't tell him that was the name, of course. Nor did I tell him that people usually lose their shirt when they play the game for real. But he's been asking to play game after game after game, so I was looking for a game with minimal setup, minimal instructions, and that can be quickly played with just a couple of simple tools. I picked up some dice for the purpose (in different colors, so I could use the color for game mechanics), but instead of making up a board game - I relied on a simple dice rolling game for starters. 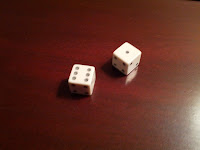 And he picked up on the rules very quickly. Roll once - a 7 or 11 means you win immediately, a 12 or 2 means you lose immediately, otherwise we'd pull the number card out and you had to match that card before you got 7 or 11. We did that for a few rounds, with him adding up the dice correctly each time, until he got bored and we moved onto another game.

Next I teach him blackjack. Eh... probably not.