DON'T PLAY WITH YOUR FOOD

"Don't play with your food" are the four letter words I dread saying to my four year old.

One of the most difficult things about being a parent, it seems to me, isn't answering the numerous questions... it isn't being woken up at any hour of the night... it isn't the feeling of powerlessness when they're sick, and there isn't anything you can do. All of these are difficult, to be sure, but more than all of those is the conflict that rages every time you tell them to stop playing with their food.

I hate doing it. I watch my son blowing bubbles in his milk, and I remember when I used to do the same thing. He's clearly having fun... he's not hurting anyone or anything... it is just youthful playfulness. There really isn't much of a reason to stop him.

Except there is. He does need to learn table manners, and understand that play is good, but there are times that you need to do something besides play. And this doesn't just apply to eating. He can play on the staircase, finding delight and wonder in the shape or texture of the railing. Or sing to his stuffed animals when I'm trying to get him dressed to take him to school. Or playing with a blade of grass on our walk home from school. There are lessons to be learned, of course. Playing on the stairs are fine... as long as you don't fall down.

But beyond these practical lessons why does he have to do anything besides play? As an adult, I have lots of pressures on me - time... bills... work. (Four letter words, all.) But as a child, he does not have these same pressures. He is free to explore his seemingly limitless universe. Why should I impose a boundary on that cosmos? 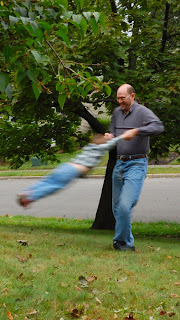 Sometimes I can escape my world and join him in his, and it is a wonderful place. Free of limits except those our own dreams bring us. A world where we can blow bubbles in our milk and spin in the bright fall air till we're dizzy. A world where we can fly to the stars in his playhouse in the back yard. A world where we can dance and sing in front of the video camera and watch and laugh about it later. Where we can dream about what we want to do that afternoon... or tomorrow... or next year.

And then... I need to return to mine. And I wonder why I try to bring him into my world, instead of learning how to do more in his.

I don't have an answer. I just know that I can't just leave my world and its responsibilities.

But that also includes the responsibility I have to him to make sure he gets the most out of his world that we can. That he can start, firmly planted on the Earth, but still reach for (and make it to) the stars.