One of my favorite halloween traditions is to visit the window decorations in Nyack, NY. Every year, the art students at the local high school compete to paint the windows of downtown stores in halloween themes. There are always some creative and clever pictures, and this year was no exception. This picture, of a headless Dorthy and gang from The Wizard of Oz struck me as one of the best. But I wanted to bring you a few that I enjoyed.

As grotesque as this image can be, I like how it parodies the DaVinci work Vitruvian Man. There is just something that appeals to me with a work showing the sense of proportion being transformed into a work of bone, blood, and gore. 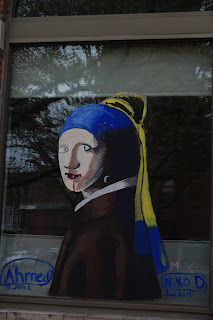 I had to do a double take when I saw this version of Vermeer's Girl with a Pearl Earring. It is so wonderfully done, that there is no doubt immediately what inspired it. At the same time, it took just a small subtle change to completely change the spirit of the picture.

One picture that I missed, that I wished I had taken, was of the headless horseman. The story has always been a particular favorite of mine since it was set right across the river from Nyack in Sleepy Hollow. 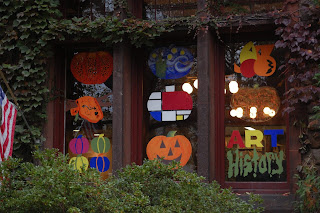 It wasn't till I saw this window, actually, that I realized there was a theme among many of the windows this year. Quite a few referenced other works of art - mostly movies or the drawn arts. This was whimsical, but tied all the other windows together (and made me wish I had taken pictures of some of the others).

On the way home, however, I captured this final picture... that reminded me that weaving was another particularly appropriate art form for the season. 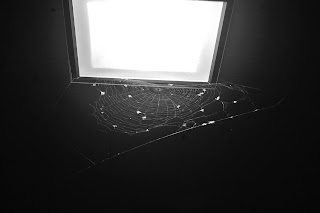 I haven't seen pictures from Nyack since the storm, but I can't imagine they're very good. I received word today that Trick-or-Treating has been postponed indefinitely because the roads are quite dangerous with quite a few downed power lines.

However you express yourself this spooky season, stay safe.
Don't lose your head.

Email ThisBlogThis!Share to TwitterShare to FacebookShare to Pinterest
What: hols, safe