Swag can be a pretty greedy four letter word.

Back at the end of June, I attended Google's I/O conference. It was three days surrounded by some incredibly bright people who worked with Google software - I learned a lot, and I hope I'm somehow able to go to next year's conference as well.

In the tech industry, it is popular to get "swag" at the various conferences people go to. The term swag comes from a slang term in the 1860's meaning plunder; booty; money; valuables.

T-shirts are common swag items. I know many people whose entire shirt wardrobe consists of these conference bonuses. At some conferences, you see people wandering around with bags of stuff they acquired from various vendors. Google had some neat stuff, including these containers of Jelly Beans, highlighting the code name of the Android operating system they were rolling out at the conference. But also in the "goody bag" was hardware - including their Galaxy Nexus cell phone, the brand new Nexus 7 tablet, and the latest Chromebox.

This particular trio is interesting, since I think it illustrates one of the ways that the personal computing industry has changed, and will be evolving over the next few years. For the past few decades, we have relied on a single desktop machine where we do our work, communicate with others, and play our games. Increasingly in the past few years, that has begun to diversify - laptops became the dominant way to do these tasks, and some of them were eventually offloaded to our phones and tablets. Increasingly, we may use any of these devices to do the same thing, and we expect them to all work together - or at least not fight with each other.

At what point will the laptop lose its dominance, in the same way the desktop unit has lost its dominance? Instead, to be replaced by the phone and/or tablet to do many of its tasks. For those that require a keyboard and larger display, will we begin to turn to things like a Chromebox or a Mac Mini that is light, transportable, and easily attached to a screen and keyboard at our sit-down destinations? I think so. In fact, I think that day is nearly here. For some occasions, I ponder that it will be easier to bring my Chromebox with me than my (heavier) laptop, and I expect to try that out in an upcoming trip.

And what comes after that? The Chromebox and Mini are as light and small as they are because they're borrowing laptop concepts, and packaging them as if they were desktops... and removing things like a keyboard and screen that add bulk. I think that trend will continue to have dektop-laptop hybrids. But what other hybrids will we see? Just this week, Google released a new Chromebook that uses components taken from phone and tablet development and put them into a laptop shape, and Microsoft is releasing the Surface, which straddles that same line as well. I expect we will see more mutants along these lines.

This suggests that, increasingly, our "computers" will be taking on shapes that are more tailored to their specific tasks, but powerful enough to work with other devices to meet our needs. Some thoughts along these lines in a future entry.

But now I need to use my swag to finish this entry, take a picture of the Jelly Bean android, and read some more of my book before I call it a night. 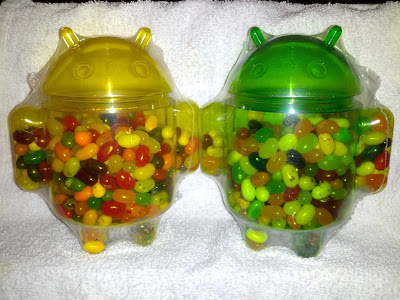 Email ThisBlogThis!Share to TwitterShare to FacebookShare to Pinterest
What: tech