Word reached me yesterday... no... thats not quite true. The meow did not reach me yesterday evening, which is how I learned that Daniel Pudini, the cat I had lived with for the past 15 years, passed away.

When a friend tells me that their cat isn't acting normally... I point out that there is no such thing as a "normal" cat. That said, Daniel was exceptionally abnormal. In his youth, he was often fond of imitating birds - either by quacking like a duck or riding on my shoulder like a parrot. While birdwatching, he would often quack at the birds. He was skilled on the balance beam, often walking on the railing over the staircase, with over 10 feet to the floor below. He was talented at other acrobatics as well - more than once I found him on a shelf 8 feet above the floor, with no obvious way he could have gotten there.

As he got older, he became more of a crotchety old man. Watching TV, or at least sitting on top of the cable box. Although not a mouser, he was invaluable at "helping" me move the mouse on my computer. He was very vocal - although once, after an airline flight, he had meowed himself hoarse and was mercifully silent until the next day.

He was predeceased by his sister, Gracie, and is survived by his younger brother, Bagheera, and a loving family who cared for him and about him. He will be missed. 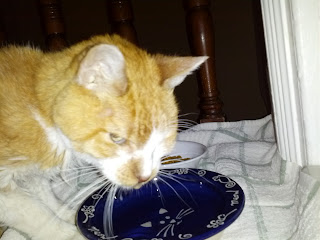 Email ThisBlogThis!Share to TwitterShare to FacebookShare to Pinterest
What: meow