A game can be a playful four letter word.

My friend over on Google+, Bernie DeKoven likes to write about fun. He takes his fun very seriously, and very un-seriously at the same time. I have much to learn from him, but he has raised my awareness of fun and games and play. 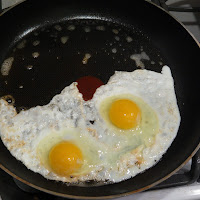 So when a game started over there called Breakfast Combo, I got pulled in pretty quickly. It tapped many of the sweet spots for me. In my mind, it has a lot of similarities to Zendo, since it is run by one person, but played by many others, and the person running it isn't actually in competition with the other players, but ends up having to coordinate a game so it is fun for them. This made me ponder why I liked this game over other games - and I realized that the particular social nature of it was part of why I enjoyed it. The people who were playing it helped shape the game itself, lending their personality and world-view to the objects being guessed.

Today, a slightly different "game" ran rampant. The goal was to type in each letter of the alphabet and see who from your circles was listed first and then to post that list. It was very popular, and I got mentioned more than a few times (usually as a match to F). I didn't do it myself - it didn't seem very fun to me, and I felt somewhat sorry for the people who tended to match U, X, and Y over and over. So why didn't I like this game? Why didn't I find it fun?

I think part of it was that it didn't really tickle any of what I like about social interaction. I didn't get to learn anything about these people - they were just random names. This is like a lot of the name games that get passed around on Facebook - there was nothing to them. They were very... hollow. With the Breakfast Combo game, I was meeting new people, and exposed to a bit of how they think and why they might be interesting to follow and talk to. With the Name Game... all I knew was that they have a Q in their name or something.

Games don't always have to have deep meaning or significance to have fun. I've played games like Are You A Werewolf?, and there was no deep meaning to it. But it was fun because there was some substantive interaction with the people involved - each round was different because of how everyone acted. Even playing something like Chutes and Ladders with my son can be fun because of the unique way he approaches the game (and one of these days we may actually finish it). That illustrates that people being silly can make a game fun simply because they are the ones making it so.

For me, games are fun because of the interaction. Bernie talks about the fun in a game of catch or in other "zero outcome" games. He's onto something there.